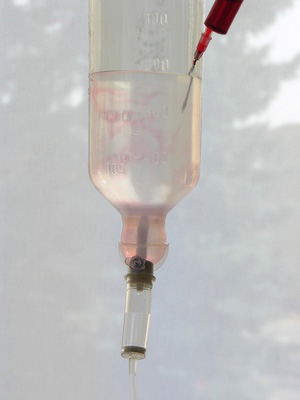 Chelation is the process by which chemicals bind with minerals. Chelation therapy is a highly effective treatment for clearing heavy metals, excess calcium, and artery-damaging chemicals from the bloodstream. Although it was first used to treat heavy metal poisoning, chelation has since proven valuable for the treatment of heart disease and other circulatory disorders.

Chelation has long been a successful, natural alternative to reducing inflammation and infection in the body. Chelation therapy involves the use of compounds taken intravenously or orally to bind metals present in toxic concentrations so they can be excreted from the body.

How does it work?

Chelation Therapy (pronounced Key-LAY-Shun) is derived from the Greek word chele meaning claw of a crab. It refers to how, in a pincher-like fashion, a chelating agent grabs onto an electrically charged mineral ion such as lead, copper, iron or calcium.

Chelation came to the forefront in the 1950s because it successfully treated cases of lead poisoning among those who worked in factories making batteries, and among U.S. sailors who painted ships with lead-based paints. 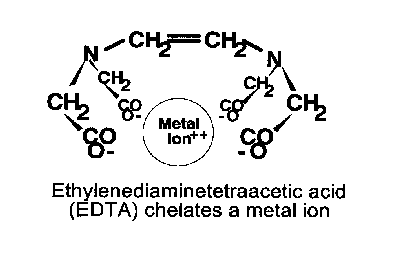 Atherosclerosis, the narrowing and stiffening of arteries due to the accumulation of plaques, is a primary cause of heart attack and stroke. What if there was a nonsurgical therapy that could slow the process of atherosclerosis and restore healthy circulation?

EDTA is a proven means of enhancing arterial health and boosting circulation. Chelation affects every inch of every blood vessel, treating the whole person and areas that surgery cannot reach. EDTA, ethylenediaminetetraacetic acid, is used as one chelating agent.

EDTA is a synthetic amino acid that binds to the metals and escorts them out of the body. EDTA is never broken down in the body; it goes in and comes out as EDTA with no pharmaceutical-like side effects. EDTA has a 40-year record of safe use; it is estimated that over one million patients have received intravenous chelation therapy.

DMPS, dimercaptopropanesulfonate, is used preferentially for elevated body burden of mercury, since it binds more tightly to mercury than EDTA. DMPS is a di-thiol chelator. Mercury binds, in a nearly irreversible fashion, to thiol groups (-SH) of intracellular structures, such as proteins, enzymes, and DNA.

The Mercury damages the structure, and just doesn’t let go of the thiol group. This is why Mercury toxicity is cumulative. Mercury can get in to your body with relative ease, but on its own it leaves only slowly.

To remove Mercury that is “stuck” to a thiol group, we need to present to the bound Mercury something that it can bind to tighter than one thiol group, such as two thiol groups. The di-thiol chelators, DMPS and DMSA, can pull Mercury off its thiol binding site, and then escort it out of the body.

DMSA, dimercapto succinic acid, is an oral sulfur-containing chelating agent which also has a high binding coefficient for mercury. DMSA, like DMPS, is a di-thiol chelator. Unlike DMPS and EDTA, DMSA is well absorbed.

DMSA is not a very powerful chelator, but taken over a period of time, particularly within a magnetic environment, DMSA can provide you with effective chelation.

DMPS, more powerful than DMSA, does not get into the nervous system, while DMSA does. Many clinicians recommend “de-bulking” the Mercury with DMPS, then finishing up the job with DMSA. However, we have seen an improvement in neurological function following the use of DMPS-Glutathione, especially in Autism.

It allows the person the flexibility to decide when and where they would like to engage in their chelation therapy.

Oral chelation uses EDTA and other chelators, anti-oxidants, and beneficial minerals to replace those lost in the chelation process. The toxic metals are then released through the urinary system.

Receive a free Aesthetic consultation (phone or in office) from Dr. Maria Sulindro, a leader in Aesthetic and Anti-Aging Medicine.

Font Resize
Contrast
Accessibility by WAH
Call Us Text Us